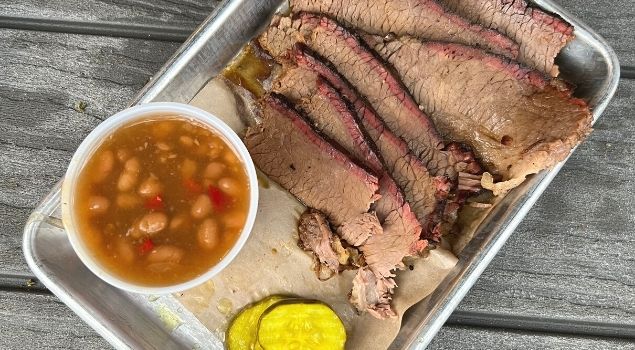 Famous Myron Mixon’s new barbecue spot in Hoboken, NJ. Their first location was in Old Town Alexandria, Virginia, the second location opened in Hoboken, and the third one is coming to Miami. They are eager to be the best BBQ joint in Hoboken, NJ.

We ordered the brisket, pulled pork, hog chicken wings, and dry-rubbed wings. The pulled pork was tender and juicy, but the pre-cooked brisket was dry. Hog chicken wings were all covered with a sweet glazy hog sauce and were too sweet for us; however, the dry-rubbed wings were less sweet but sweet again. All the sauces on the table were sweet also, which makes the restaurant almost a candy shop. You can not find any decent non-sweet sauce or meat in this restaurant.

They should have sugar-free ice tea, sauces, and sides for those who don’t consume it. (Diabetic people liked this.)

And the chicken wings…

Oh, spicy Jesus, we had the hairy ones we didn’t ask for and were very disappointed with the wings. As a note, the wings came with the blue cheese sauce. The only thing that we liked in Myron Mixon’s was pulled pork. So if we ever came back again to this restaurant, we promised ourselves only to eat the pulled pork.

The service and the staff were friendly. Myron Mixon’s Barbeque is a half self-service restaurant, which means you go to the counter and give your order.

Overall the food was decent, but the portions were tiny.

So do I come here again? Yes, but after all, just for the pulled pork. We’ll give the ribs a chance. After all, Myron Mixon Barbeque needs improvement.

Myron Mixon learned to barbeque from his father, Jack Mixon when he was just old enough to hold a shovel to add coals to his father’s pits. The barbeque was the family business, but it wasn’t until his father passed away in 1996 that Myron entered his first competition. He figured it would help him get exposure to Jack’s sauces line and support his family.

What is Cabernet Franc?

Know This: How to Build a Better Burger?